How can we help you today?

These features are in beta.  There will be another late Q1 or early Q2 to improve the usability of these features, including online help.  One of the goals of the next release will be to bring the product in line with the new reporting requirements for MU which begin April 1, 2014.

Select a link from the list above to jump to the details for that enhancement.

CMS has made several changes to the MU Stage 2 guidelines and in order to meet the certification criteria the following changes were made to the Clinigence interface:

Each of these classes has a corresponding tab on the Measure Details Patient List screen. 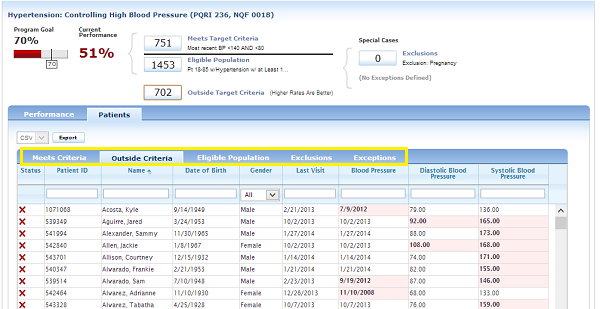 Certain guidelines have special cases in which a patient who meets specific criteria may be subtracted from the Eligible Population (denominator) when calculating the current performance percentage.

Exclusions: Patients who meet the criteria for the Eligible Population (denominator) AND meet the Exclusion criteria defined for that guideline by the authority. These patients are subtracted from the Eligible Population when calculating the current performance percentage. Examples of exclusion criteria are conflicting diagnoses or conditions that would prevent the patient from satisfying the target criteria such as a patient with a mastectomy being excluded from the denominator for a breast cancer screening guideline.

Exceptions: Patients who meet  the criteria for the Eligible Population (denominator) AND meet the Exception criteria defined for that guideline by the authority. These patients are subtracted from the Eligible Population when calculating the current performance percentage UNLESS they satisfy the Meets Target Criteria (numerator). If they do, in fact, meet the target criteria, they are included in both the Eligible Population count and Meets Target Criteria count when calculating the current performance percentage. Examples of an exclusion would be when a treatment in unavailable (ran out of flu vaccines) or refused by the patient.

The performance rate is defined as:

For example, the BMI guideline shown below has an Exclusion defined for patients with a pregnancy or terminal illness diagnosis.  Previous versions calculated the excluded patients, but did not display them in a patient list. Version 3.3 allows users to view the patients who were either excluded or fell into an exception class along with the evidence that put them in that special case.

Version 3.3 allows users to filter patient populations on-the-fly for various characteristics, including office location and payer. The filtering options will vary depending on the program and practice.
On any screen where the Population Filter + button appears, you can select filter options that will adjust the numbers for the patient population based on the filters chosen. 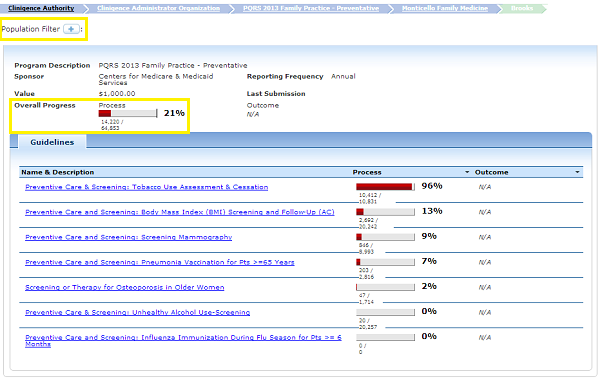 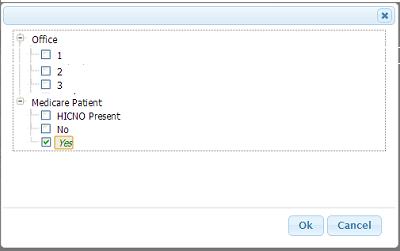 The display numbers are updated to reflect only those patients who meet all the filter criteria selected. The current percentage is reduced to 19% with 1,573/7,988. 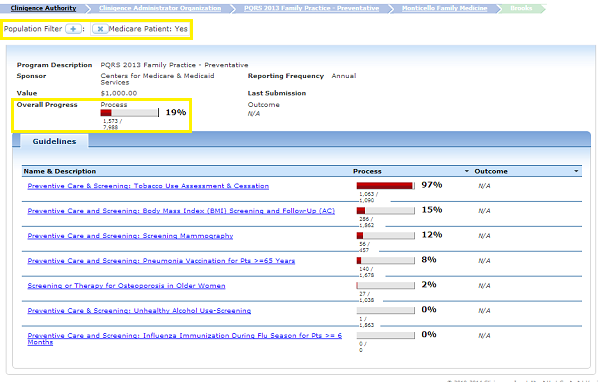 The selected filter criteria will continue to be active and effect each page displayed until the X for that filter option is selected. 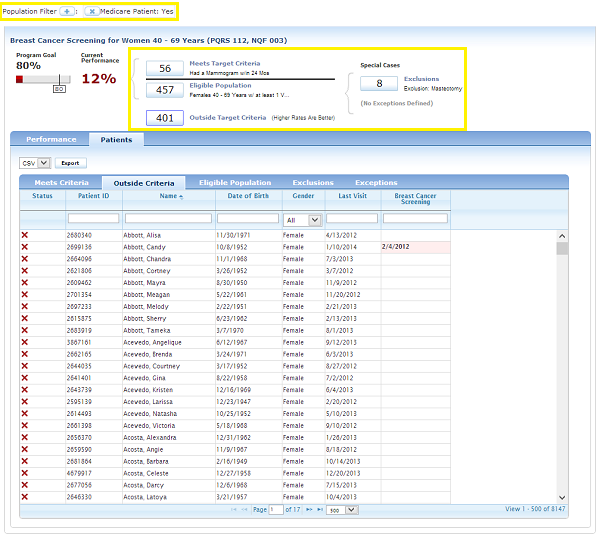 Milestone Dates
Users can select a specific date range on the Measure Details - Performance screen. This is helpful when wanting to view the numbers for a measure at the end of a reporting period, such as the end of a quarter or the end of the year.
When a milestone date is created, a small blue triangle appears on the progress trend line. 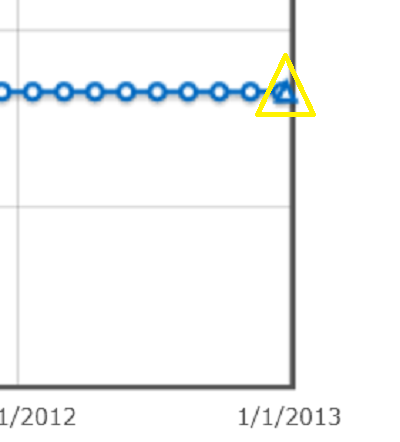 Enhanced Display for Inverse Measures
Inverse measures, those guidelines that are defined so that a lower score is better, are better identified on several screens.

At the highest level, the values are "flipped" when rolled up so that the lower number doesn't adversely affect the overall progress incorrectly. The Provider average reflects the actual numbers and will show a green progress bar when the current percentage is less than the performance goal. 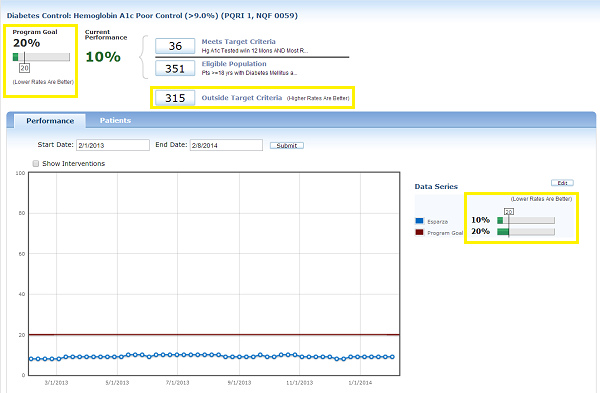 There are several places on the Measure Details screen that draw attention to the lower is better characteristic of the guideline.

Did you find it helpful? Yes No

Send feedback
Sorry we couldn't be helpful. Help us improve this article with your feedback.