How can we help you today?

While most measures are written so that the scores represent a percentage of patients, in certain measures the denominator and numerator represent a count of visits, diagnoses, or other episodes of care. For example, the medication reconciliation measures that are found in multiple programs all count qualifying encounters in the denominator and count encounters where a medication reconciliation was documented in the numerator.

The Performance Dashboard has been updated to better reflect the episodes of care being counted for each class (numerator, denominator, exclusion, exception)

In episode-based measures the denominator and numerator will always be a count of the episodes that qualify for each respective class. Exclusions can be either patient-based (all episodes for that patient are excluded) or episode-based (only certain episodes are excluded, while others may qualify for the numerator or complement). The measure specification will indicate which method is used for any exclusion. An example of a patient-based exclusion would be an allergy or other contraindication that would make meeting the numerator criteria unlikely. An example of an episode-based exclusion can be found in the Avoiding Antibiotics for URI measure where a prescription for an antibiotic prior to the qualifying denominator event would exclude only that denominator event while other qualifying denominator events where there was no prior RX could still be counted. 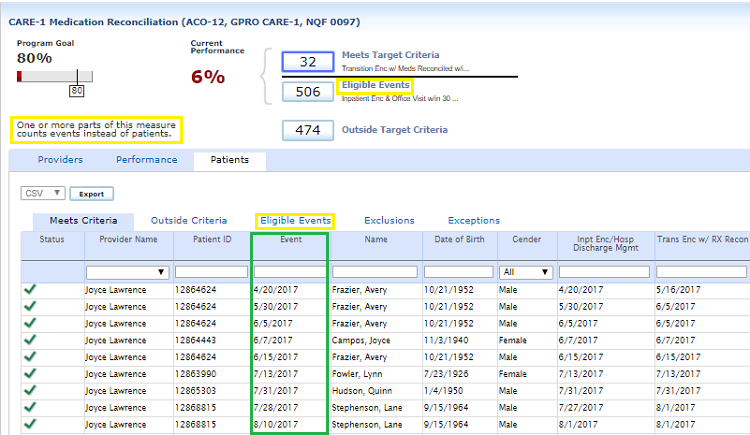 Several labels on the measure details screen will alert you to the episode-based nature of the measure (highlighted in yellow).

A new column will display for all episode-based measures with the date of the Event that is being counted. Notice for patient Avery Frasier there are three different dates in the Event column indicating that those three dates met the measure's numerator criteria.

A single patient can appear multiple times in the patient lists and can appear in both the Meets Criteria and Outside Target Criteria, if he/she has multiple qualifying episodes. In the following screen shot, Avery Frazier also appears in the Outside Criteria list with a fourth event date.

Did you find it helpful? Yes No

Send feedback
Sorry we couldn't be helpful. Help us improve this article with your feedback.